I wrote up this incident report after I deployed my reserve parachute while paragliding in the Owens Valley on 4/24/18.

I am a P4 pilot with ~200 hours since receiving my P2 in January 2016.
I have previously flown the Owens Valley for ~3hr in October 2017 and ~3hr in March 2017.
We arrived in Bishop Sunday evening after flying 3 days at Tollhouse. Light winds in the forecast for the first half of the week and reports from locals promised good flying.

Flew 80km (11:30-3:30pm) from Paiute with my friend, R, on Monday. We flew with three other pilots for the upwind, beginning leg of the flight. Conditions felt well within abilities (less than three minor <20% tip collapses, one minor <half chord frontal, <10mph SW winds). Flying without an oxygen system. Felt minor hypoxia symptoms (hint of headache) above 13kft during first half of flight. Countered with deep breathing and leaving the thermal. No identifiable symptoms above 14kft for the remainder of the flight.
https://www.xcontest.org/world/en/flights/detail:danielhfourie/23.4.2018

I launched from Paiute on Tuesday at 12:45pm with R and two other pilots. Flew north, reaching Montgomery Peak at 2:45. Observed and reported wind were similar to Monday. No collapses or frontals. No identifiable hypoxia symptoms. Turned south after agreeing to attempt an upwind leg back to launch.

Flying S in smooth air into a <15kph SW headwind on less than half bar, I was looking to push forward onto the windward face of Dubois where I had previously caught a climb. I felt that I was in a comfortable position, especially having seen another pilot cruising along the same ridge below me (half my AGL) only 4min beforehand. 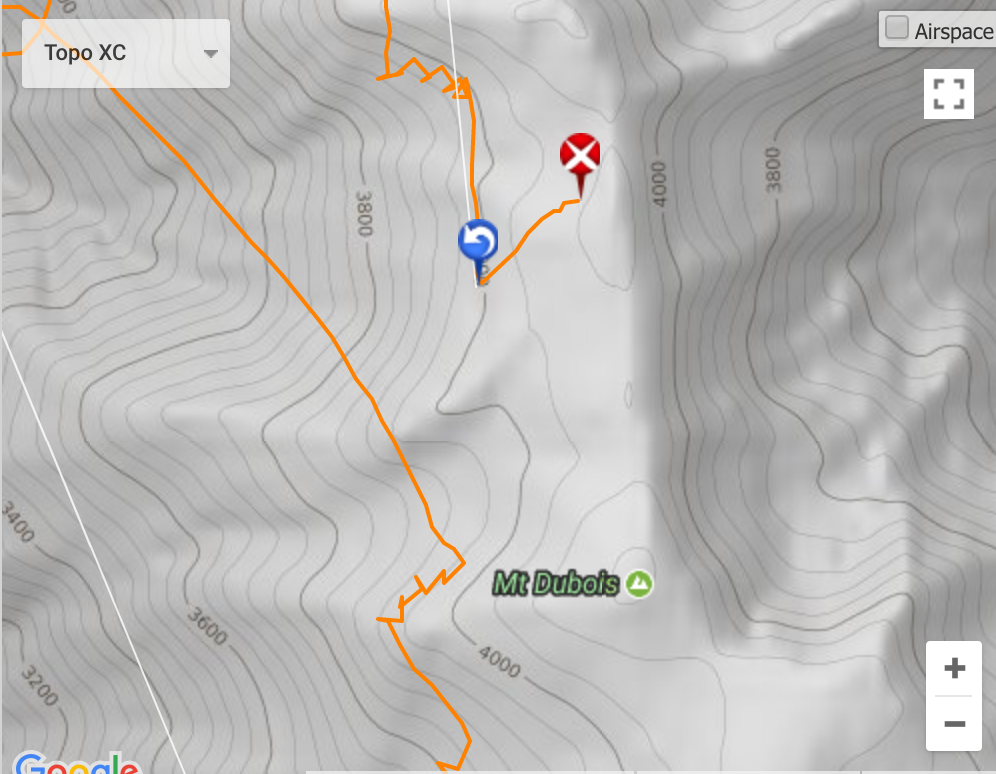 Flying along in smooth air, with hands wrapped around brake toggles and touching C risers, I felt an instantaneous loss of pressure indicating a large frontal collapse. I released bar, and input on both brakes to minimize the frontal, but it was clearly way too late or insufficient. Hands up immediately after realizing I hadn’t stopped it. As it surged, I checked (don’t remember how much) and looked up and saw the wing for the first time: double cravat, deeper on left side, starting to auto-rotate CCW. Facing SE. With the depth of the cravats, my mind immediately made the decision that I would not be able to fix it with my perceived altitude and I reached down for the reserve, letting go right brake. I pulled and threw it as I spun through facing W. Found the handle quickly even in mittens and it came out with a strong tug. I pulled it out and let go in one motion. I failed to check to see where wing was. I felt the tug of it opening within the next few seconds. Realized at some point here that my helmet had come off (buckle released). I started hauling in hand over hand on left brake line to disable the wing. Looked down, saw my descent rate, and got my feet out of harness for PLF. I hit the ground facing W, most of energy absorbed through legs and butt cushion before rolling back and knocking my head. Minor flash but never lost clear vision.
(Landed 2:59pm at 13,400ft on nearly flat, packed scree). My wing was near me and mostly disabled and deflated already. I felt a tug from the reserve, which I then jumped up to disable by pulling on the apex line. Pulled everything into a pile and sat on it. I pulled out my radio, removed the headset plug, and radioed landed safe under reserve, probably within 2min of landing. Acknowledged by R who was about 2km away. I sat for 5min relaxing to stop shivers and ate a cookie. Pulled out my phone which luckily had service and checked the Mount Dubois descent route which someone had posted to Mountain Project. I did not want to descend the steeper, taller, and more unstable CA side. I texted my intention to walk down the NV side to the three other pilots (at 3:09). Relaxed for a little longer and then started packing up. Sorting out the wing for the concertina bag, I had to pull lines out from a few cells away from midspan. I responded LOK (at 3:39) to a chat from friend who was watching my inReach tracklog. I considered looking for my sunglasses and deployment bag, but decided getting down quickly was more important. Started walking at ~4pm. The hiking and route-finding were straightforward. Some Class 2 scrambling along the ridge. Continued to communicate with my retrieve via cell and inReach as I descended. Reached Davis Meadows Ln (Middle Creek) trailhead (8,400ft) at 740pm.

Speaking to top local pilots afterwards, the likely cause of the sudden frontal was encountering downdraft turbulence on the lee side of a thermal. Need to be extra cautious pushing upwind on bar in sharp-edged conditions. Altitude over ground makes terrain rotor very unlikely as a cause.

I was surprised to find that my tracklog showed 1500ft AGL - I thought I was quite a bit lower. This means both that my AGL estimation is poor, and that my SIV confidence is lower than it should be. 1500ft should be sufficient to at least work on the wing for a little bit. On the other hand, I felt after landing that I had had just the right amount of time to throw, assess descent, disable the wing, and get into PLF before landing. It went by much faster than the ~60s it looks like I had between the blow-up and landing. Overall, I am very happy that my mind made the snap judgement to throw immediately.

My helmet unbuckled itself at some point during the descent. It is unclear to me whether this was caused by the wing risers or the reserve risers or something else passing across the buckle and unlatching it. I believe this is a problem with the helmet buckle design. This is a strong accusation to make, so I will elaborate. I know that the helmet did not get pulled forward off my head with the buckle still closed both because I saw that the buckle was open after landing, and because testing afterwards demonstrated that this is impossible to do without damage to the trachea, which I did not have. The helmet was still with me after landing because it was still attached by the headset cable. I am doubly certain that my helmet was buckled at launch both because of my usual preflight checks (which have never missed my helmet), and because my headset mic does not sit properly at my lips unless the buckle is secured (and I used the radio several times during the flight). I will be contacting the manufacturer and getting a different helmet.

My reserve is large and gave me a nicely slow descent at sea level during SIV. At 13kft, the lower air density (0.8 vs 1.2 kg/m^3) means a descent velocity increased by ~20% (rho proportional to v^2).

Both local pilots recommended afterwards waiting up at altitude until late evening and taking a sled ride down to the valley floor. This would certainly have been possible from the gently sloped terrain where I landed and I should have at least considered this option, but I think I made the right call descending on foot because I was quite confident that I could make it out before sunset with my degree of alpine experience.

Wing inspection/untangling the next day revealed that I had managed to pull in 8ft of left brake and that the wing was twisted 5x with respect to my harness. I also had to remove some deep line-overs.

It is very possible that I could have landed somewhere less perfect (steeper terrain) or been injured on landing. I had enough food and water and shelter to last the night, though I should have been carrying both a SAM splint and stronger painkillers in order to be able to move to a more sheltered or stable location if necessary. It was very reassuring to find out that friends were watching my inReach tracklog in this case. This would have been critical had I not been able to communicate my condition myself.

In order to fly the Owens, I need to be able to fix what I had with the altitude I had. I made the right decision to throw in this case. But I need a lot more practice getting out of bad configurations. I’ve scheduled more SIV.