The recently released 15" MacBook Pro with Retina Display is undoubtedly the best designed and implemented piece of computer hardware on the market today. I'd like to point out a few fundamental things about the design of this laptop that do not immediately suggest themselves upon examining it from the exterior. To illustrate my points, I will gratefully use images from ifixit, a site which, while providing high quality teardown photos, usually skips over the details that interest me as a mechanical engineer and product architect.


For us humans, our vision is the sense with the highest bandwidth input and with the most processing/comprehension power behind it. If one's goal is to facilitate human computer interaction, it makes sense then to put primary focus on the computer display. This is why the Retina Display is the driving component behind the design of this laptop.


What other decisions had to be made to define this laptop? Well, the HDD and ODD are of course eliminated because they have established, superior technologies to replace them. This decision allows the base of the laptop to be thinned considerably and also allows more room for batteries (necessary due to increased power consumption by the display). The legacy MBP high level ID has also been preserved: machined aluminum rounded-corner rectangular enclosure, plastic barrel hinge, etc.


After the display resolution, the secondary focus of the architect is making sure that the display runs smoothly and quickly no matter what the user is demanding of the computer. Ensuring this requirement is achieved by using a powerful CPU and GPU and ensuring that these run cool. As processors heat up, they run less efficiently: frequency starts being throttled to prevent overheating, frame rates go down, the display starts to lag, and the experience is lost. As such, the second driving component is the thermal management system. The heat from the processors must be evacuated from the system as quickly as it is dissipated in the chips. Briefly, forced convection is the quickest way to achieve this in the form factor of a laptop because the cool air continually being drawn into the system maintains temperature deltas and thus keeps transfer rates high. And there's plenty of ambient temperature air to be drawn in wherever the laptop may be used.


But, as a result of the thinner base, less area is available for air to be drawn in, and less space is available for it to flow. More inlet area needed to be opened, and higher air flows were required. As you can see in the pictures below, the laptop utilizes two fans(blowers) and vents in the bottom of the base.


In my opinion, this was a smart move. Not only does it allow more airflow, but it draws air in a continuous stream over the entire surface of the main logic board (MLB), additionally cooling power FETs, memory, secondary chips, and inductors. In thin laptop design, there is an eternal tradeoff between uncompromising ID and skin temperature/fan noise/processor power. The architects of this laptop made the right decision for a better product, and implemented it elegantly.


Ok, let's look inside finally. First and foremost, what strikes the eye upon taking off the bottom cover of the computer is symmetry. It's pretty damn beautiful. A lot of the continuity stems from Apple's OCD color-matching, but a large part of it is just the layout: One continuous heatpipe (if you dont know how these work, look em up: basically mini refrigeration systems) - you better believe it's exactly symmetric. Two chiral fans and fin packs, mirrored batteries, and stereo speakers with matched-curve ducts.

One other interesting note about the vents is that the gap between the back vents and the barrel of the hinge is significantly larger than previous MBPs. This may have been implemented to move air across the face of the display in order to cool the inverter board at the bottom of the screen and the transistors across the panel itself. 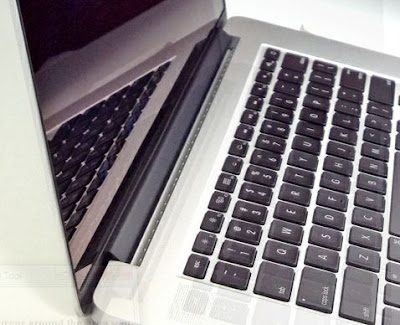 Looking briefly at the hinge assembly, the WiFi/Bluetooth antennae are concealed inside the hinge barrel. By moving the antennae from the around the perimeter of the display to here, the entire display assembly can be made thinner.

Finally, both the LCD and the batteries are adhered permanently to their respective enclosures. Both of these decisions were made for stiffness reasons: as thickness decreases linearly, area moment of inertia decreases exponentially. The architects had to find ways to use what they already had to make the product just as stiff as before. In the case of the LCD, the panel is adhered to the lid enclosure with double-sided tape around the perimeter. The two lines of tape constrain the edges of the panel in a fixed (not simply supported end condition), effectively creating a stiff torsion box structure. Laminating the batteries to the top of the base enclosure allows them to lend their stiffness to the thin aluminum.

There are dozens of other details that I could point out here, but my point in the preceding paragraphs is to get you to think about product architecture in terms of priorities and constraints.

Surprising that Apple did nothing new to improve input to the computer.